A commentary by Dr. Tommaso Tamihatco on certain excerpts of "A Little Diary that Fell from the Moon," by Fr. Filippo Dell'Amore


I look down on an earth rotating from Fifth to Sixth. I see Tseen Tsang crack open. From the mouth of the mountain fired a great shot – a war between earth and moon, a cannonball greater than the earth that shot it, like an earth hatching, and from that earth a moth with five wings, turning, then six wings...

Tseen Tsang was in the most straightforward sense a polity prominent in the days of the Abraxas Primus and described as alternately a military enemy and trading partner of the great City at that time. The name, literally “Lance of Heaven” implied a rifle, and the diaspora of the people associated with the site are identified as Iron Star or Gun star people. Thusly they were known as skilled iron forgers and, especially gunsmiths, being innovators and traders in firearms. Stereotypes depicted them as war profiteers and negative, conspiratorial influences on their rivals.

(In the systems of war gaming taught at the civic military academies, a Tseen Tsang long-rifle dealt 1d10 damage, had range equivalent to a crossbow, and its noise prompted additional encounter checks.

While typically the bullet of a long-rifle added +2 to hit against an armored opponent, a “Hero,” or a member of a Fighter society led by a hero, would wear warrior decoration efficacious against missiles equivalent to AC 5; AC 3 for a “Super-Hero.”)

The site of Tseen Tsang is associated with a dormant volcano some 120 miles southwest of the Great City – an example of the underworld creation myth motif particularly common in cultures related to Sixth Sun people, which is reflected also in the creation-destruction motif in pseudo-Dell'Amore – the author of the diary consistently refers to himself as Dellamorte – with the great Moth's five, then six wings:

The forefinger, pierced with a stingray spine
Completion
The sun is occluded by the moon
Flint Knife Moth, its wings are spread
Arriving, the age
With the taste of bitter herbs

Regarding which, more can be said later. But, once again, the Diary:

And I tumbled from my place and in the moon dust beneath me I saw form the glyphs of folly. And cut in the betweenness of the glyphs the dark places under the mountain with ghosts of men not there. And among the ghosts I was in those inscribed houses.


The City itself, Tseen Tsang was purported to have been a great complex of tunnels and vaults, so labyrinthine that outsiders would disappear into the mountain and never be seen again; a kind of contradictory state where the interior of the mountain was simultaneously an efficient forge of industry, home to hundreds of thousands, yet also a kind of haunted and ephemeral knot wherein mythic contests and challenges were faced. Dell'Amore refers, by glyphs, to the Saklas earth-glyph a kind of orientation-dependent expanded writing known in the codex ascribed to the Cartographer-Priest, Death Sun.

And then, lit brightly, beneath the mountain the city was the market I dreamed of my youth – not truly the streets I treaded, and above me not the sun, but the immeasurable vault, and in the architecture under that vault I traced that name : - - - - - - and saw the yellow hair and the streets folded again over themselves but I did not see those eyes...

Perhaps if the redacted name could be determined, the specific earth-glyph could be referenced and the imaginary space mapped out. But Dell'Amore means to say, it is clear, that Tseen Tsang existed  as a kind of structural form assembled from the glyphs, as a kind of dream-journey improvised by the performer to reflect the experiences, desires, and fears of the protagonist of the journey.

(A source, requesting anonymity, has suggested that a certain proctor of a prestigious academy uses the earth-glyph or geogram system as the terrain of a targeted wargame scenario where a specific objective must be ascertained, then accomplished, with specific glyphs presenting challenges relevant to the 'houses' of Saklas myth – Houses of Blades, Houses of Flames, etc. In a dual pronged approach where  the struggles of early Abraxas/Tseen Tsang war epics are paired with challenges targeted to the Protagonist(s) personally – a kind of test of mental or spiritual mettle.)

This, unavoidably, recalls the Tale of the Red Catacomb, purportedly beneath the ancient Temple of Ammon in the upland hills south of the Black Mangal, wherein were “A Place beneath a chimney where Horse Bones were smoked.” The horse, it must be said, was long extinct before being returned to the region by Easterling colonists.

The horse was long thought to have been lost to memory until remains were found far inland by scholars. Until, that is, the Tale was discovered, and, indeed, used as an aid to decipher certain Saklas glyphs. n.b.

“Heal the sick” prefigures the Tale's ghostly figure known as the “Horse Doctor Man,” who capriciously offered medicine to the sons of his killers – but to one son, a bolus or paste that sent him to  “Dark House” after “Dark house” until he found the Jawbone of a Tall Horse with which he killed his eldest brother – the brother,

A hulking brute, an ancient horse twisted into the shape of man by the force of eons of spite. It wears a tattered robe and in one hoof-fingered hand holds a great pestle, in the other a bowl of bitter herbs. It chants brayingly in the imitation of an ancient language, and so long as it chants its gaze has the power to charm. It selects a patient, bends that patient to its will, and administers a medicine from its mixing bowl. This has the following effect:

If necessary, it will defend itself with blows from its Pestle or, by consuming its own medicine, disappear into a maze to escape.


The figures of Tall Brother and his siblings in the Tale are early recensions of the beings known colloquially as Those Who Live Anywhere; a kind of quasi-immortal ancestor or supernatural in rustic oral tradition. A man named Yawilaiyi, significantly, a trader of horses became lost in a deep forest and was fed with “food from a stone” by a kindly old man in a white robe. Returning, he had lost taste for human food, and began to waste away, but after returning to the forest would reappear 'from a stone' to visit for many years thereafter. This suggests the way of the people who settled within the stone of Tseen Tsang, and emerged 'from there' to trade crafts – A synthesis between Those Who Live Anywhere and Those Who Live Nowhere.

A fine-featured man, woman, or other-gendered person typical of the hinterlands of the Abraxas region, with white hair and wearing a shining white robe of ancient design, carrying a walking-stick. OWLA appears near a stone surface, and may move freely anywhere within sight of its observer, even appearing in multiple places. Seldom hostile unless to return hostility, or unless its sacred precinct is defiled. Their clothing and staff generate Light at will. Once a day OWLA may cast Sleep, Lightning Bolt, Cure Disease, Stone Shape, Part Water, and Control Weather. Nigh-immortal, if OWLA is defeated in combat, it must have been very, very old, to have met the end of his life. Dangerously, this instantiates its opposite number, a Tseen Tsang Ancient Brother, into separate existence, drawing its attention.

In the rain of iron scales from the six wings, rained ghosts bound in iron, into the void between split halves, I see them, bound in circles, in the heart of the city, pulling me, breathing me in...

As in the Saklas Stanzas, Dell'Amore evokes the foundation of the old world in the remnants of the new – the iron-bound Ancient Brothers of Tseen Tsang, a kind of bound ancestor figure recast as part of a cycle in which they continue to teach their ways to a cloven or strobilated version of themselves...they cast shadows which cast...

...I remember a dream I had last night...a house of my youth, in flames, but through each door, only more house. Deeper. I cannot help but find an echo in Dell'Amore as I hear a moth at the window and see my reflection. In an Iron mask. Breathing in unison.

An emaciated, mummy-like figure, bound in irons, pierced with spikes, masked, breathing arsenic, caught between life and unlife. At the heart of a labyrinth deep beneath Tseen Tsang, Only its chains keep it from nonexistence. If its attention is drawn, those who it recognizes may be drawn into the labyrinth. At will it may cast Fear, Darkness, and Confusion. Ever-distant, it can be reached by no missile, nor by any spell with a range other than Touch. Place it at the opposite end of a 10x10 geomorph. It creates images of objects and beings in the minds of those it perceives in its labyrinth. It is clear that to find the object is to find the brother. Until the object is found, each round the Brother summons a Shadow for each of its opponents from the black lines of the geomorph. When the object is found, the finder must save vs. spells, or the Brother may dissolve it into one of its spell-like attacks. If the object is truly held, the brother may approach. To attempt to strike the brother, save again vs. Spells. If failed, place another geomorph. The brother is places at the far end. The process repeats. If the brother is struck, it breathes out poison gas. Save vs. Death. If the brother is slain, the mask falls away and the face is the face of the slayer. He dissolves Now the Slayer is the brother, but free. This means little until the appointed moment. Once in this new life, the Brother's will asserts itself. Save vs. Spells or do its bidding until the completion of the task. If the save is successful the time has not come. One day, perhaps, it will. 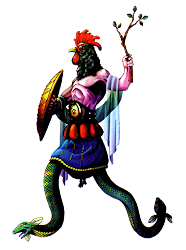